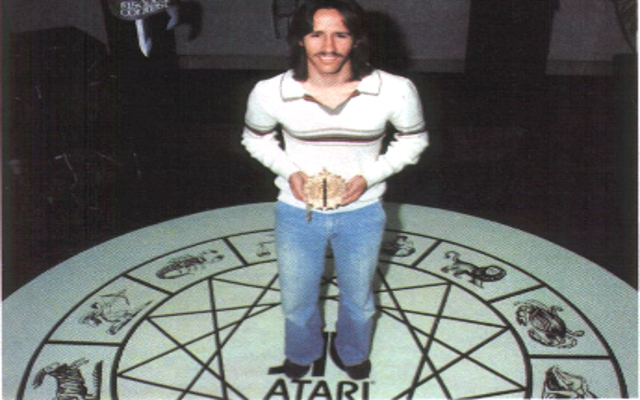 I’ve talked about behind the scenes info on the Swordquest games before on this blog (or an earlier version of it) years ago: HERE, and HERE in fact. Unfortunately, the Geocities link sources of those posts have went the way of One Terabyte Of Kilobyte Age (but findable in the Wayback Machine). Looks like there is also an updated version of the 2600 Connection site, which includes an interview with Clive Young, who found several photos of the 1984 Swordquest championship in an old shoebox full of Atari games found at a retro electronics store.

Incidentally, the Swordquest Championships of the early 1980s wasn’t the first video game championship ever. That would be the Spacewar Championship of 1972. It was, however, one of the last hurrahs of second-generation games before the Crash Of 1983.

Michael Rideout, pictured above next to the Chalice, still owns it (or at least confirmed still owning it a decade ago in an interview). Steve Bell (the ridiculously handsome fella pictured below) won the Talisman, and almost definitely sold it based on his post-game interview.

Rumors have persisted about the whereabouts of the remaining prizes, but Curt Vendel, designer of the Atari Flashback and the the Atari History Museum suggests they are just rumors.